It has been more than two months since I wrote about the return of Eastern Phoebes to a nest on our house, and amid the busyness of spring and summer, I’ve been remiss in not reporting what transpired.

These two chicks stayed in the tree near the nest long enough for us to snap their photo on May 29.

I’m pleased to say that we are having another Phoebe summer, just like the ones we had enjoyed before the last few seasons when these favorite birds arrived on schedule, but did not produce families. In May, the nest on the stone façade of the house just under the soffit yielded two chicks, who lingered long enough after fledging to allow me to snap their photo on the 29th.

Even better, as of this writing, the adults are feeding another family of what looks to be at least three chicks. For several weeks now, the parents have been sallying between garden and nest, snatching bugs and ferrying them back to gaping beaks. Those days appear to be numbered, however. In just the last week, the bulging mass of beaks and feathers we had been observing is now a clearly defined family that is outgrowing the nest and will soon be urged to depart.

The porch railing post has been a favorite stopping-off point for the adults before they take food to the nest.

That rite of passage always is tinged with sadness for us because we know we won’t be seeing these beloved birds as often, but the days leading to it are pure delight. Throughout the day and in the evening, we love watching the adults fly into the garden, perch on branches, arbors, and posts, stop by the bird bath, or use the porch railing as a segue between their little nursery and the food supply. As they move about, they seem to become accustomed to our presence, allowing us to train the camera lens on them or weed and water the garden while they are in it, provided we keep a respectable distance.

Before the last few chick-less seasons and after several consecutive years of Phoebe summers, we had come to take the presence of these charming flycatchers for granted. This year, having experienced drought, we are reveling in the joy of abundance, enjoying every sighting of a drab brown-and-white Phoebe, whether we are walking outside, sitting on the screened porch, or peering through the kitchen window. 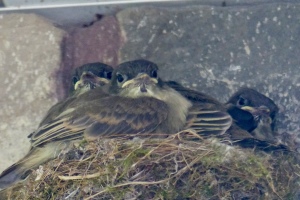 Time to leave? This shot taken on July 7 clearly shows the chicks are outgrowing the nest.

We are hardly the first to discover that Phoebes make companionable and beneficial seasonal guests. In Birds of America, a treasured early 20th-century book we keep alongside our Sibley Guide to Birds, George Gladden writes, “ . . . the [Eastern Phoebe’s] confiding ways and gentle manners have won the real affection of its human neighbors, who should realize as well that it is very useful as a destroyer of noxious insects.” Gladden also praises the Phoebe’s skill and speed in pursuing its prey and provides this apt description of its movements: “Like its relatives it generally selects a perch on a dead limb or fencepost whence it has an unobstructed view of the immediate surroundings, and it is likely to return to this perch after each darting sally.”

Lest anyone even think of discouraging these migrants when they build their nests near human habitations, he writes: “Let the Phoebe remain just where it is. Let it occupy the orchard, the garden, the dooryard, and build its nest in the barn, the carriage house, or the shed. It pays ample rent for its accommodations.”

I couldn’t agree more. From its insistent call in the spring to its aerial feats, bobbing tail, and appetite for pesky insects, the Phoebe brings us many gifts, not the least of which is the window it opens into a world designed to work all things to the good.