“Silence, like the sunlight, will illuminate you in God.”

These words from the late Trappist monk Thomas Merton once greeted visitors to a barn in Monroe County, Michigan, that had been set apart as a place of quiet and prayer. The barn was closed a few years ago and has since been razed, but I thought of the sign on the door recently as I was reflecting on those among us who cannot live without constant sound. In their cars, they must have the audio system playing, and at home, the TV is always on, sometimes even as they fall asleep. 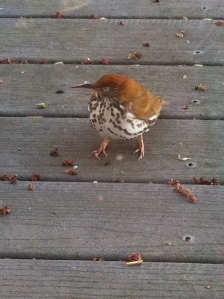 Wood thrush. (This one is recovering on our deck after striking a window.)

In talking with friends who live or spend time with such people, I have pondered why this is so and, indeed, why all of us are uncomfortable with silence at times.

A writer friend tried to puzzle it out in an email as we were discussing the beginnings of this blog. She wrote, “What you’ve said reminds me of something I learned in Aristotle where he says the reason people are afraid to be alone (i.e., to be silent) is because they’re afraid of seeing who they really are. So, they fill their life with lots of distractions . . .”

Silence, as Merton suggested, does shine a light onto who and what we are, showing us things we would rather not see or consider. But perhaps it is just as true that our fondness for noise and stimulation is rooted in our fear of the seeming nothingness of silence and stillness – the vast abyss that looms before us when our tools and toys are set aside or turned off. The sheer magnitude of the quiet unsettles us and so we rush to fill it with something – anything – that can momentarily distract us and assuage our discomfort.

When blogger Kim Smith (NatureIsMyTherapy.com) wrote recently about her quest for more stillness and her struggle with distractions, she cited a piece in the Utne Reader on “The Lost Art of Doing Nothing.” In it, Christian Williams talks about “losing the ability to sit and do nothing” because he, like everyone around him, now habitually turns to a smart phone to fill down time. In urging us to “spend more time staring into space rather than into a screen,” he suggests that silence and stillness are breeding grounds for new ideas and solutions. I would add that being still is not so much a state of nothingness as a canvas ready to receive a different design or even a moment of delight. Silence is really a preparation, a cleansing, a clearing of the ground for something new or better that we will never hear or see if we constantly fill in the background with noise or stimulation. Some friends who have recently gone on silent retreats engage in this kind of purging when they agree to refrain from speaking, except to pray out loud or meet privately with a retreat leader. This discipline has a purpose: so they can hear the still, small voice of God that is often drowned out by the clamor of our lives.

The other morning, as I was waking, I heard a wood thrush singing outside. It is a sound I typically hear earlier in the spring and so I wasn’t especially listening for it, but the conditions were right: the window was open, the clock-radio was set for prime bird-singing time, and when it did go off, it was not blaring, but set to play gentle music at a low volume. I was also able to hear and enjoy this bird’s reedy song because I had made space to listen to and identify it some years ago. One spring evening, I followed the sound through the woods, eventually training my binoculars on its source and pairing the wood thrush I saw with the splendid sound I had been hearing. Had I not stilled myself and carved out some times of quiet to become an observer of birds, I would have missed this auditory treat, part of a rich feast of bird song available to anyone willing to listen and experience the enrichment it brings to life.

This is just one example, but in offering it, I mean to say that those who master silence and stillness lead lives that are anything but hollow. They may not have filled their minds, eyes, and ears with a panoply of ready stimuli that form the stuff of social chatter, but having confronted and engaged the seeming emptiness of silence and the initial discomfort it brings, they hear and see what so many miss – another layer of life that lies beyond and above the pressing business of what we call living.

© Judy Roberts and QuietKeepers, 2014-2020. Unauthorized use and/or duplication of this material without express and written permission from this blog’s author and/or owner is strictly prohibited. Excerpts and links may be used, provided that full and clear credit is given to Judy Roberts and QuietKeepers with appropriate and specific direction to the original content.